Here is a simplified, abbreviated, introductory bio of a man’s life with a focused ideal. It sounds simple, but straight to the heart of the matter. Far from being simple, it is profound and extends over a lifetime in doing. But yet so rich in the doing.

“I am the vine, you are the branches. He who abides in Me, and I in him, bears much fruit; for without Me you can do nothing.” John 15:5 NKJV 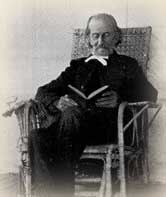 Andrew Murray was a man of such deep spiritual strength that people wanted to know his secret. How had God worked in his personal life? Although Andrew wrote books explaining how we need to live in Jesus, he refused to tell anyone about his own spiritual life. The famous Scottish preacher Alexander Whyte asked him for this information. Andrew’s daughter pleaded. Others asked, too. But Andrew always shook his head “no.” Jesus Christ should be exalted, not Andrew Murray. [Emphasis mine.]

But at a Keswick conference (Keswick was founded to encourage deeper spiritual life) so many people urged and pleaded that Andrew finally gave in and wrote a short testimony. It appeared in The Christian magazine on this day, August 25, 1895.

Andrew explained that as a young pastor he had been full of zeal and worked hard. He knew he was born again, but he felt that he was lacking power in his ministry. He longed for something better. An older missionary encouraged him with the words, “If God puts a desire in your heart he will fulfill it.”

For years more, Andrew struggled. Looking back, he could say that he thought God was putting more and more of his Holy Spirit in him, but he did not see it at the time. Even when he wrote his book Abide in Me, he knew it was true, but had not experienced all that he wrote about. Yet, ten years after he began to really seek to be filled with Holy Spirit power, he could say that he had learned to abide in God’s presence continually.

Why did he fail for many years? Why do we fail when we seek to live close to Christ?

“I will tell you where you probably fail,” he wrote. “You have never yet heartily believed that He [God] is working out your salvation. Of course you believe that if a painter undertakes a picture, he must look to every shade and color and every touch upon the canvas…But you do not believe that the everlasting God is in the process of working out the image of His Son in you. As any sister here is doing a piece of ornamental or fancy work, following out the pattern in every detail, let her just think: ‘Can God not work out in me the purpose of His love?’ If that piece of work is to be perfect, every stitch must be in its place. So remember that not one minute of your life should be without God. We often want God to come in at a certain time, say in the morning. Then we are content to live two or three hours on our own, and then he can come in again. No! God must be every moment the worker in your soul.”

“May he teach us our own nothingness and transform us into the image of His Son and help us to go out to be a blessing to our fellow men. Let us trust Him and praise Him in the midst of a consciousness of failure and of a remaining tendency to sin. Notwithstanding this, let us believe that our God loves to dwell in us, and let us hope without ceasing in His still more abundant grace.”

11 thoughts on “Church History: A Life”

Writing from the Heart with Brian
Dreams from a Pilgrimage

Now we see through a glass, darkly

I will behave myself wisely in a perfect way. O, when wilt thou come unto me? I will walk within my house with a perfect heart. Psalm 101:2

Embracing the healing love of Jesus - encouraging lives who are on the journey of recovery and restoration.