These may very well be “The Days of Elijah.” If so, they are also certainly the “Days of Deborah,” t’boot. When the Lord calls us into spiritual battle, there remain no longer male, female, Jew, nor gentile. We are all one in Christ according to His call. Can you hear that first trumpet?

“Whether you turn to the right or the left, your ears will hear a voice behind you, saying, ’This is the way; walk in it.’ Isaiah 30:21!

Who Was Deborah in the Bible?

Deborah is one of the most influential women of the Bible. As a prophet, Judge Deborah was said to hear God’s voice and share God’s Word with others. As a priestess, she did not offer sacrifices, as the men did, but she did lead worship services and preach. 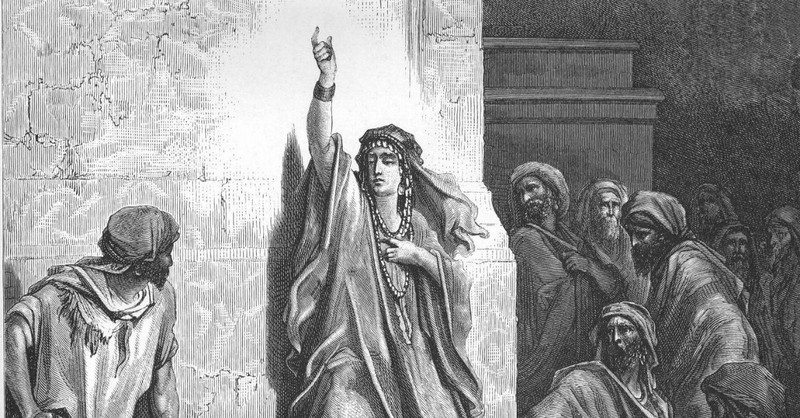 Deborah is one of the most influential women of the Bible.  She is known for her wisdom and courage and is the only woman of the Old Testament who is known for her own faith and action, not because of her relationship to her husband or another man.

As a prophet, Judge Deborah was said to hear God’s voice and share God’s Word with others. As a priestess, she did not offer sacrifices, as the men did, but she did lead worship services and preach.

Facts about Deborah in the Bible

Deborah, (Devorah or D’vorah in Hebrew) is translated as “bee.”

The Midrash (a collection of teachings on the Torah) explains that the Hebrew people are said to be like bees in several ways:

1. Just as bees follow their leader in a swarm, the Jewish people follow the sages and prophets to teach them.

2. As a bee sting is quite painful, but the bee’s honey is incredibly sweet, God’s Word will sting those who don’t follow His commands but will bless those who live righteously with a sweet life.

3. Bees collect pollen and nectar, not for their own benefit, but for the benefit of others, just as the Hebrews collect mitzvahs (a good deed done for others or religious benefit) for the Lord’s pleasure and benefit.

4. Bees are a lowly insect, which is a reminder to God’s children to be humble.

Deborah’s Roles as Judge and Warrior

Judge Deborah was one of the rulers of the Hebrews (and the only female leader) in the Old Testament. These rulers were called “mishpat,” which is translated as “judges.” A role that originated back when Moses appointed helpers to assist him in resolving arguments among the people.  (Exodus 18).

Judges sought guidance from the Lord by praying and meditating before proclaiming their ruling on a matter.  Many of the judges were also thought of as prophets who articulated “a word from the Lord.”

Deborah would sit under the palm tree between Ramah and Bethel in the hill country of Ephraim; and the Israelites would line up for her to rule on a matter.

In the next verse, Deborah agrees to go to battle with Barak and the troops but share with him: “However, there will be no glory for you in the course you are taking, for then the Lord will deliver Sisera into the hands of a woman” (Judges 4:9).

Judge and warrior Deborah went off to battle with Barak, and, as foretold in prophecy, Sisera fell at the hands of a woman – but not Deborah. Rather it was Jael, the wife of a clan leader, who would avenge the Israelites by driving a tent peg through Sisera’s head with a mallet when he asked for water and respite.

Biblical commentaries and scholars disagree on Barak’s acceptance of Deborah’s battle leadership. Some feel that Barak respected her as a leader and prophetess and willingly heeded her call. Others, however, concluded that his response in Judges 4:8 pointed to his discomfort in taking orders from a woman, despite the esteem she is held in.

In Judges 5, we read Judge Deborah’s story again, but this time as a poem. This chapter in Scripture, often referred to as The Song of Deborah, is believed to be written as early as the 12th century BC and is considered by many biblical scholars as one of the earliest examples of Hebrew poetry.

This poetry celebrates the Hebrew’s victory over the Canaanites and Sisera’s army.

“Wake up, wake up, Deborah! Wake up, wake up, break out in song! Arise, Barak! Take captive your captives, son of Abinoam. The remnant of the nobles came down; the people of the Lord came down to me against the mighty… So may all your enemies perish, Lord! But may all who love you be like the sun    when it rises in its strength.” (Judges 5:12-13, 31)

What can we learn from Deborah’s story?

Deborah, and her story, can teach us so much, but there are three lessons we can all learn from:

If God is telling you to do something or go somewhere, despite your fears, listen to His call.  He has plans that we cannot begin to understand, and hearts and lives may be changed by our obedience.

The old saying “God doesn’t call the qualified, He qualifies the called”   applies here.  Doing something out of your comfort zone to glorify Him can be terrifying, but faith was never promised to be easy.  Be bold. Be courageous – for His glory.

Never waiver in your faith. We may not always know what the road ahead will look like, but we only need to remember that God will faithfully guide us and lead the way.

This article was adapted from the author’s original post, “What we Can Learn About Courage and Faith from Deborah.”

Susan J. Nelson is a writer, speaker and the creator of Women of Noble Character ministries. She is passionate about helping Christian women to grow in Christ, improve their marriages and creatively worship. She lives in rural North Central Missouri with her handsome and hilarious husband and a myriad of dogs, cats and chickens.  Susan runs on Jesus, coffee, and not enough sleep. More of her work can be found at Woman of Noble Character.

6 thoughts on “Who Was Deborah?”

an unnecessary overshare of my life.

Meet me on the Road

Interviews, reviews, marketing for writers and artists across the globe

The Inner Landscape
Confessions of a Christianity Freak

Our lives in the present age.