Here is a bio of a writer who wrote over one hundred fifty hymns during her lifetime. I consider it a pleasure to pass on the works of one so committed to the Savior, though possibly lesser known in modern Church History.

God is not unjust; He will not forget your work and the love you have shown him as you have helped his people and continue to help them. Hebrews 6:10

Lest we forget the Lord’s sacrificial love for us, and all we owe to Him, even our daily lives. -g.w. 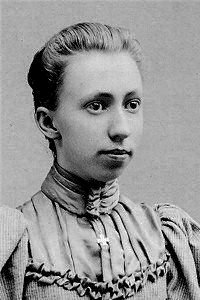 JENNIE EVELYN HUSSEY wrote one of the church’s best-loved hymns of aspiration. She began writing verses when she was eight and saw some published when she was just thirteen. Three years later, she began furnishing magazines with children’s stories, articles about flowers, and crochet designs. When she was twenty-four, the first of her many hymns was published.

Although Hussey wrote over one hundred and fifty hymns, several of which appeared in hymnbooks in her own day, the only one familiar to most people today is “King of my life, I crown thee now,” with its haunting refrain “Lead me to Calvary.” It was written during Passion Week and, at the urging of church friends, submitted for publication, appearing in print in 1921.

King of my life I crown thee now —

Thine shall the glory be;

Lest I forget thy thorn-crowned brow,

Lead me to Calvary.

Lest I forget Gethsemane,

Lest I forget thine agony,

Lest I forget thy love for me,

Lead me to Calvary.

Hussey was born 8 February 1874 in Henniker, N. H., in an old farm home that had been occupied by four generations of Quaker ancestors. She attended Quaker meetings from childhood. Much of her life was spent caring for an invalid sister, which she did cheerfully, often referring visitors to Luke 9:23, which calls us to take up our crosses daily.

She herself suffered debilitating rheumatism from middle age onward. A description written when she was in her mid-fifties described the fingers of her left hand as curled up while those of her right hand would bend only at the knuckles.

Her love of nature shone not only in verses but in letters to friends:

[Y]ou might find me in a wooded valley at the foot of Mount Hunger, feeding a company of gray squirrels that come to the trees and scramble over my windows, while blue jays call their companions to share the food I scatter for them. I am fond of and know by name the flowers in my range; I cultivate many house and out-of-door plants, while the trumpet vine, striped grass, old fashioned yellow lilies, elm and crab apple trees, lilac and syringa bushes surround our house, with its rockeries of ferns and columbine.

Among her poems was “The War Dog,” verses telling the true story of Sallie, a stray mutt who had attached herself to a Pennsylvania soldier and remained beside him after he was killed in battle at Gettysburg—becoming the mascot of the 11th Regiment of Pennsylvania Volunteers.

Towards the end of her life Hussey asked to be baptized (Quakers did not baptize). Her closing years were spent in a home for the aged in Concord, New Hampshire. On this day, 5 September, 1958, Jennie Evelyn Hussey died in Concord. Her remains were returned to Henniker for burial in the Quaker graveyard.

READ MORE ABOUT GREAT HYMNS IN CHRISTIAN HISTORY 31, THE GOLDEN AGE OF HYMNS

7 thoughts on “Lest I Forget”

When you feel more loved and accepted by sinners than other Christians...the church has a problem.

His eye is on the sparrow

By Grace you have been saved through Faith

Called by Jesus to journey here with good news.

The Domain for Truth
God's Word To Us