From the Archives, Luffing Sails. This document is a reprised post from long ago, edited, reworked, and re-presented here.

Down dropt the breeze

the sails dropt down

And we did speak only to break /

We stuck, nor breath nor motion /

As idle as a painted ship / Upon a painted ocean.

“The Rime of the Ancient Mariner”

Down dropt the breeze

There are times when my sails begin luffing as I lose the wind. It happens to the best sailors, and I’m certainly not that. I’m speaking figuratively, and I’m speaking of writing one more blog post while a blank page stares back at me with the challenge of a blinking cursor that says, “no words! No wind.”

Sometimes the thoughts, ideas, text flood into my mind so fast that the sails of the old schooner billow, filled with wind, threaten to capsize the whole vessel. At such time it’s all I can do to quickly reel in and capture notes of the swirling ideas for further development in the future. 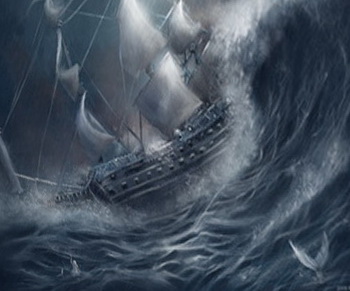 But at times of the cursed blinking cursor, no stored words or notes apply. No words. No pictures. No ideas. No sketches. Nothing. Not a ripple. Not even a cat’s paw upon the surface of a glassy sea. I sit at my desk, eyes half-closed looking at that computer screen. Vacant. Empty. Blank. Staring.

And. So! In the vast, barren, desolation of nothingness, a big “SO WHAT – I DON’T CARE!” out of nowhere comes flooding in to fill the void.

[That demon apathy floods the bilges and tries to sink, weigh down, or otherwise make the helm unresponsive to any set course of headway. What to do? “Who cares?” “What does it matter anyway?” Apathy! “I don’t write for profit.” Apathy. “My existence does not depend on being a scrivener of words on a page, screen, abandoned building walls, nor the temptation of a silky sandy beach in a tropical sun. My life is not dependent on words.” Apathy. Challenging. It taunts its desire to have me. To take over entirely by causing me to mount a mutiny against — myself.]

“BUT (I say) I need words to organize and describe the illustrative snapshots. The parts and parcels. The yet-to-be-organized pictures, murals, illuminative designs I have in my mind that I want to communicate to – well — to whomever.” I begin a defensive counter-attack. “Jehovah Nissi – the Lord is my banner! It is under Him that I serve. I am not writing for my ideas, financial gain, fame, or fortune. I’m writing to make Him known, magnifying – to glorify – my Savior — from my perspective, sure. But who’s perspective do I know – do I have the experience of – other than my own? And what person who tap-tap-taps can say any more? For better or worse, who can describe more?”

[Apathy is now unsure of its position. It begins to vacate the bilges. It’s backing away, uncertain of its footing, with wide-eyed concern. The mutiny is weakening. Its desire to have me is lessening. It is draining back into the wide-open seas. The battle belongs to the LORD! It is His to have the Victory, once again! Trust and obey. Trust and follow! A good thing to remember.]

A good thing to remember is whether the sails are windless, and the vessel becalmed, or the seas are thrashing under heavy weather with sails ripping and timbers creaking. Trust and obey the Captain, under Whose banner we serve.

And so! Onward to the next “battle of the ages” called life, in this age of the earth called ‘Today.’

“Today, if you hear his voice,

do not harden your hearts

as you did in the rebellion.”

“And this entire assembly may know that the Lord does not save with the sword or the spear; for the battle is the Lord’s, and He will hand you (apathy, or whatever situation) over to us.” 1 Samuel 17:47

Someday this war will end. When it’s over, it will be over. Until then, I keep putting one foot in front of the next. Never give up, never retreat!

Embracing the healing love of Jesus - encouraging lives who are on the journey of recovery and restoration.

an unnecessary overshare of my life.

Meet me on the Road

Interviews, reviews, marketing for writers and artists across the globe

The Inner Landscape
Confessions of a Christianity Freak