Background to “His eye is on the sparrow. A well-known hymn of God’s care.

(And why I chose this hymn title as my Blog title: I find this hymn very encouraging as a constant reminder.)

Civilla Durfee Martin (1866-1948) was born in Nova Scotia and died in Atlanta, Ga. In “His eye is on the sparrow” (1905), she has provided one of the most influential and often-recorded gospel hymns of the 20th century.

Jessica Simpson included this song in her album Irresistible (2001). The most stirring renditions of this song are associated for many with actress-singer Ethel Waters, who loved this it so much that it became the title of her autobiography (1950).

Martin was the daughter of James N. and Irene Harding Holden, and was a schoolteacher with modest musical training. Together with her husband, Walter (1862-1935), they often wrote gospel songs for revival meetings. “Be not dismayed” (UM Hymnal, No. 130) is an example of their collaboration.

Walter Stillman Martin was a Baptist minister who received his education at Harvard. He later became a member of the Disciples of Christ, teaching at Atlantic Christian College (now Barton College) in Wilson, N.C., before moving to Atlanta in 1919, a location that became the base for revivals that he held throughout the U.S.

The song was obviously inspired by Matthew 6:26: “Look at the birds of the air; they neither sow nor reap nor gather into barns, and yet your heavenly Father feeds them. Are you not of more value than they?”

Later in Matthew (10:29-31), the Gospel writer continues on this theme: “Are not two sparrows sold for a farthing? And one of them shall not fall on the ground without your Father. But the very hairs of your head are all numbered. Fear ye not therefore, ye are of more value than many sparrows.” Similar thoughts are cited in Luke 12:6-7. Stanza two quotes part of John 14:1 directly, “Let not your heart be troubled…”

Civilla Martin describes the context out of which the hymn was born: “Early in the spring of 1905, my husband and I were sojourning in Elmira, New York. We contracted a deep friendship for a couple by the name of Mr. and Mrs. Doolittle—true saints of God. Mrs. Doolittle had been bedridden for nigh twenty years. Her husband was an incurable cripple who had to propel himself to and from his business in a wheelchair. Despite their afflictions, they lived happy Christian lives, bringing inspiration and comfort to all who knew them. One day while we were visiting with the Doolittles, my husband commented on their bright hopefulness and asked them for the secret of it. Mrs. Doolittle’s response was simple: ‘His eye is on the sparrow, and I know He watches me.’ The beauty of this simple expression of boundless faith gripped the hearts and fired the imagination of Dr. Martin and me. The hymn ‘His Eye Is on the Sparrow’ was the outcome of that experience.”

The next day she mailed the poem to Charles Gabriel, a famous composer of gospel songs, who wrote a tune for it. 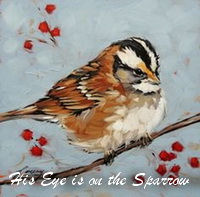 When you feel more loved and accepted by sinners than other Christians...the church has a problem.

His eye is on the sparrow

By Grace you have been saved through Faith

Called by Jesus to journey here with good news.

The Domain for Truth
God's Word To Us